March 11th, 1995
Rancho Cotate’s Corey Nelson ran 21.0 at the SRJC for the 200.
Only six Mel Gray’s, (Montgomery) and one Sherman Miller (Napa) 220’s are faster.
Nelson himself would equal that time at the April Viking Classic and May NCS MOC trials.

March 8th, 2012
The Dan Gabor Invitational would produce two outstanding performances.
Piner’s Luis Luna would run one of his five fastest 3200 meter races ever at 9:12.34.
Maria Carrillo’s Siobhan Anderson would become only the second girl in Empire history to clear 12-0 in the pole vault.


March 13th, 2004
At Piedmont Meet Cardinal Newman senior J.K. Withers ran the fastest 1600 in the state so far that season and easily eclipsed the Redwood Empire’s all-time best, winning at Piedmont in 4:10.7. Withers, who reached the state meet in 2003, bettered his personal best by nearly 10 seconds. Withers edged Logan’s Yosef Ghebray, one of the top miler’s in Northern California, by three seconds. Withers bettered the fastest mile by Dave Royal of Petaluma 4:15.0 converted to 4:13.76 in 1979 and Maria Carrillo’s Jordan Kinley 4:13.67 for 1600m in 2002 for the Empire’s all-time best mark. Withers time has only been bettered twice since that race. 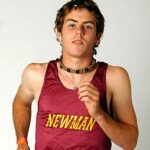 Link to photo of the race

March 13th, 2013
Santa Rosa junior Morgan Bertsch soared to a state leading high jump of 5-9 at the Special Relays at Santa Rosa High this day.
The jump moved her to second All-Time behind the 5-11 jump of Mindi Wiley of Sonoma Valley and still is.