Napa, Vintage and American Canyon high schools have requested to move back into the North Coast Section. See story here
All three schools are in the Napa Valley Unified School District. Napa High is about a 50 minute drive from the SRJC. Just under 2 hours from Ukiah to Napa.
If the NBL (8 schools) and SCL (7) took them in they could both have leagues of 9 schools.
Here is how Napa and Vintage did in last years track league finals.
I could not find any athletes from any of these three schools that made it to state finals in track or cross country in 2016-2017 season.
For the 2016-2017 season Napa and Vintage competed in the Monticello Empire League in the Sac-Joaquin Section. The SJS had seven divisions divided by school size with Napa and Vintage competing in a division I level league and American Canyon was in a division II league.
When I was a sophomore at Montgomery both Napa and Vintage were part of the NBL for the last time in 1976.
Napa had been part of the NBL since the first league track finals back on May 7, 1921.
The last year (1976) that Napa and Vintage were in the NBL the Vikings and Vintage tied in their dual meet 68-68 on April 28th.
In the finals Vintage took the pennant with 73 points to Montgomery’s 66, Napa was 4th with 22.5 pts.
And I’m sure you want to know that I took third in the frosh/soph meet at 11-0 in the pole vault.
1976 was the second year for girls track. 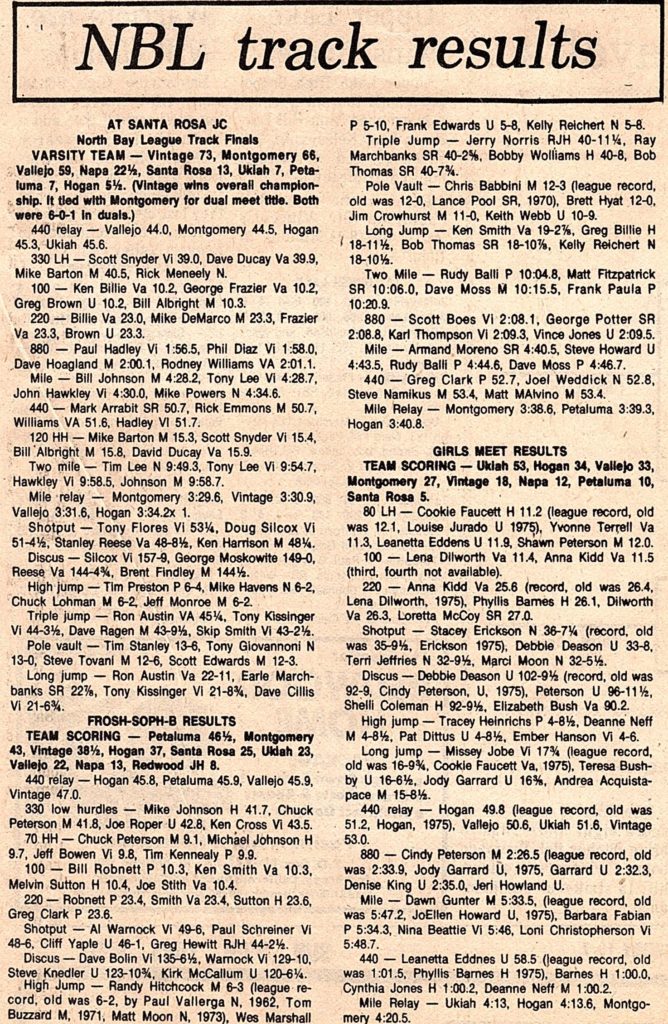