Someday our local preps will get to compete in cross country again. No one knows when but someday it WILL happen.

There is no telling yet exactly how meets will be set up to try and make them safer but one old idea might help if allowed.

September of 1976 was my first ever cross country meet.
It was at Petaluma High School with Doug Johnson putting on an unusual style Invitational.
I believe the meet included about ten teams.
For this invite the Varsity Boys did not run altogether. Instead every team’s top runner ran in the first race.
After they finished each team’s #2 runners toed the line and raced. This went on for seven races.
Times for each team’s seven runners were added together to determine team placings.
It was a thrilling meet, as the top two teams were only a few seconds apart after six runners and it all came down to their number seven runner.

Here is the story about the 2 mile races. The Dennis DeCosta written about is my brother-in-law. Dennis was a sophomore with all this pressure in his very first race. My wife Teri, his sister, was competing as a senior and I was in the open race as a junior, and placed 7th. 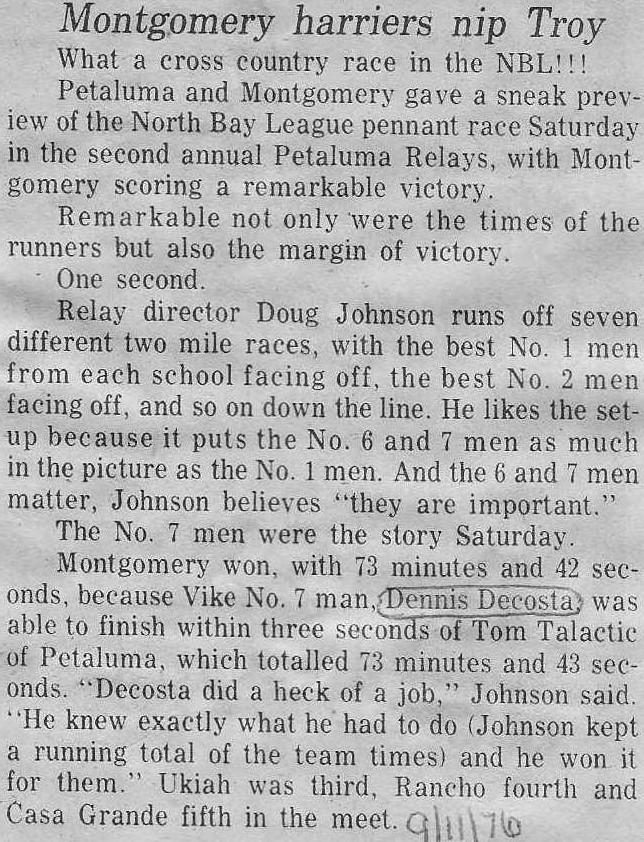 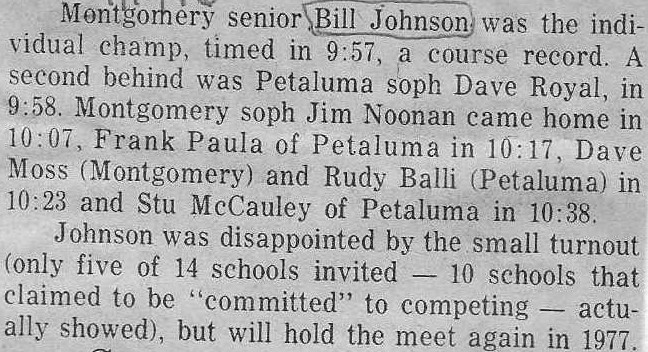 I’m pretty sure that this would not be the best way to run our next season but it might work with small adjustments.
First off, team times are a fair way to decide team winners but sticking with the current form of places can still be calculated with staggered starts.

One way would be to have all the number seven runners start together than one minute later #6 and so on.
At the conclusion, subtract one minute from number 6 runner, two from number 5 and so on to calculate race places.
A bit of extra work but would help with the whole social distancing in the race.

Not as good as a normal race but would be a fun diversion in these troubled times.