By Jim Crowhurst
If you look at my lists of 100 meter bests over the years you may wonder about there being four different lists.
Ever watch a race with two kids leaning at the line on a close finish.
Then you hear his coach say, “Wow he just ran that in 10.8.”
Later you see the official results and it shows 11.07 or the two kids who were so close get times of 10.8 and 11.0? 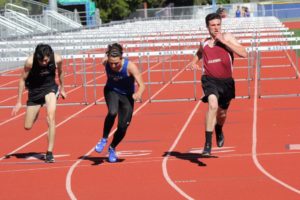 It can get very complex and I know some coaches who still get confused but I’m going to attempt to explain it all the best I can.
First there are a number of different ways to time a race.
Before computers and fancy electronics all races were hand timed.
This meant a person holding a stop watch would stand at the finish line and when they saw the smoke come out of the starting gun they would start their watch running. 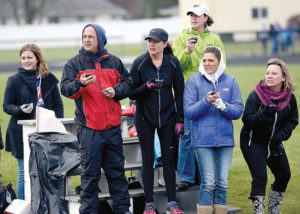 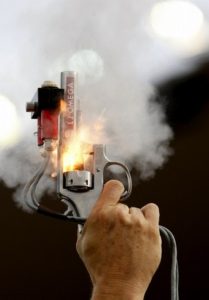 If you remember back to your science classes you might remember them explaining the speed of light verses the speed of sound.
The speed of sound is about 343 meters per second.
That means for a 200 meter race the starter is about 110 meters away from the timers so the sound takes about 0.32 seconds to reach the timers from when the gun actually goes off.
The speed of light is 299,792,458 meters per second or for our purposes 0.00 seconds.
So, when the gun goes off the timers instantly see the smoke but if they wait to hear the bang they will already be .32 seconds off. 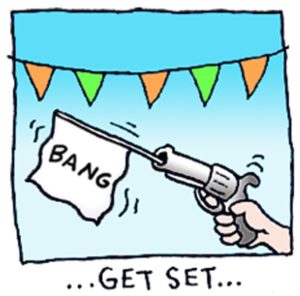 One of my favorite stories was at a meet in Santa Rosa. Our team traveled across town to the meet hosting our dual. We heard one of the OFFICIAL timers say, “Ya I always close my eyes at the start because that way I can hear the gun go off better.”
That’s how a kid who really ran 11.0 gets a time of 10.7.

Now even with an experienced timer, going off the smoke, they still are about 0.24 seconds behind when the gun really went off. Why, simple that is the average person’s reaction time from when they see something until they can make their finger respond.
Want to test this. 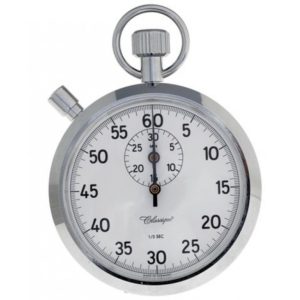 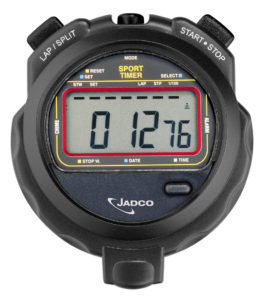 The original stop watches where spring wound that had marks on them to a tenth of a second. Then they came out with electronic hand held watches with digital displays that showed the time in hundreds of a second.
I use to test my reaction time with one of those electronic hand held watches and if you can find one you can do it to.
What you do is cover up the seconds, tenths and hundreds with your left hand, or solid tape, so all you can see when the time reaches 10.00 seconds is the 1 when it appears . With your right hand be ready to stop the watch the moment you see the 1 appear.
What you will find, unless your guessing when it’s going to appear, is that it will take you on average 0.24 seconds to stop it from the time you saw the 1. Sometimes you be a little faster sometimes slower but normally that is how long it takes a person.
So if a runner actually ran the 100 in 11.00 seconds a hand timer is going to get a time between 10.72 and 10.80. Even faster if they were really slow in getting their watch started from the smoke.
Because humans can vary so much on hand times the national rules require that all hand times be rounded up, meaning any hand time from 10.71 to 10.80 is recorded as 10.8 (Section 9 Article 5).
For really big meets using hand times they have three people on each place and the go by the middle time. So if the three timers got 10.66, 10.85 and 10.99 the recorded time would be 10.9 (Section 9 Article 3).
The most important part of the results for the finish crew to get correct in most meets are the places. Medals, team scoring and advancement to the next meet are usually determined by place.
The head timer assigns the other timers what their job is.
Normally the head timer assigns them a place to pick and to time that person. I have seen many meets where instead they assign them by lanes which can cause places to not be picked correctly. As you saw from the timing I explained a runner behind another can easily be given a faster time and if all you have is the hand times on runners to determine places you can often have a runner cheated out of their proper place.
Some meets use a hand timing device many of us call the Octopus because it is a wired hand timing system that is all connected together. 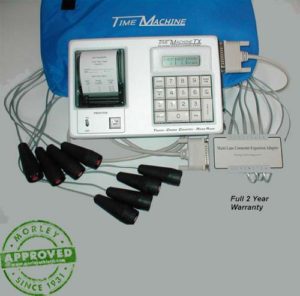 With this instead of all the timers starting their watches when they see the smoke from the gun only one timer starts all of them. This can be good or bad. If that one person started at the proper time than all the times could be trusted more or less to have the time for a runner correspond with their place. The bad part is if that one person is slow to start the timing system than every single runner will end up with a time faster than they ran.

Now all the top meets and many smaller ones have advanced to a Fully Automatic Timing system or as we call it FAT. 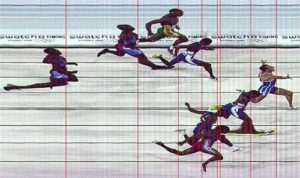 With these systems the starting gun is connected directly to the finish line computer system that takes photos to show when each runner crosses the finish line at an even more accurate rate than every hundredth of a second. Because the gun is connected to it you have zero delay in the time starting and thus you get the runners real time as opposed to the hand time that is typically .24 seconds faster.
Unlike the human split second judgement call of deciding who crossed the line in which order the photos are usually very easy to determine the correct order.

Now like all electronics these systems can fail completely or have glitches that produce bad times but that is pretty rare and many meets like this years NBL finals have a backup system running during the races and if the main system fails the other can produce the right results. Even on the highest level like the Olympics there can be questions on the accuracy of times. One that still is in debate to this day is Florence Griffith Joyner’s 100 meter world record. At the 1988 US Olympic trials with the top of the line equipment used she ran the still standing WR of 10.49. The big question mark was the wind reading. For a race to be a record and can not have an aiding wind of more than 2.00 meters per second (Section 10 Article 2). Joyner’s reading in that race was 0.00, which is very rare, and many believe that it was wind aided but the 0.00 was not correct for that race. Here is that race.

I have been t0 a number of meets where there was a disagreement on places and someone who was taking photos or videos offers their shots to try and decide the results.
The national rule book however makes it crystal clear (Section 3 Article 4e) that only cameras approved by the meet management BEFORE the race was run can be used to decide places. So even if the photo shows clearly who was ahead of who the results cannot be adjusted. Those photos and videos in the same way can not be used to determine disqualifications like obstructing a runner or other matters like that.

Hopefully this has given you some greater understanding of what at first seems like a very simple question, “How fast did they run?”, to understanding why I have different lists for the same event.