I have always loved stats , especially for Track & Field.
The site that I have created is as much a historical site as it is about what is currently going on in the sport.
Besides simple results of meets I go hog wild over making lists of comparing past marks with current.
My goal is to have it reflect fair and equal representation of the marks produced over the years.
Some things make that difficult like changing the boys 180 yard low hurdles to the current 300 meter intermediate hurdles.
Others have gone before me to establish how to convert such things as yard races to meters, typically yards times .9942 equals meters.
The majority of the rules for our sport were established before 1900 and have not changed at all.

Other web sites will list marks with a different criteria than mine. No two sites are identical from what I have seen.
If you look at national high school records you will find different records listed as the best mark if you go to places like Track & Field News verses what the National Federation Of High School Associations and others list even different marks.
For my site I have had to come up with the criteria that I felt made the best sense. It has also evolved over the years as I have decided there was a better way to display them.

Here are some questions I have had to decide on.
Does it matter if a time is hand timed or Fully Automatic Timed (FAT), if the hurdle height is correct, if the sand level is even with the runway in the long jump, if the shot put is the correct weight and now if an athlete born a boy is competing in the girls division?

A lot of coaches are currently inputting their meet results in www.athletic.net and other sites. It is a good program but it is just a computer and what ever the coaches input, it displays.
I have seen what would be a world record mark listed for high school athletes on some sites.
If the coach accidentally lists a mark as being a fully automatic time (FAT) when it was really a hand time, the computer displays it as FAT. So the mark is off, or incorrect
I see a lot of meet results for the Junior Varsity or Frosh/Soph boys shot put listed as them having thrown a 12 pound shot put when they actually threw a 10 pounder.
I have often been given marks by meet directors that I listed on my lists and then had to go back later and correct those marks when I found out that the mark did not meet my criteria.

Lets start looking at some of these situations

Throwing Implements
In 1980 as the running events were going from yard races to meters the girls shot was changed from 8 pounds to 4 kilograms (8 lbs 13.1 onces).
There is no true conversion for this but I estimate the difference to be about 3 1/2 feet or the 8 pound distance times 0.911 = 4k distance.
The real problem is it is hard to tell the two apart without actually weighing them.. Many shots had no markings on them and even today very few meets do weigh-ins to check to see if an implement is heavy enough.
This meant, especial early on, some marks may have been accomplished with 8 pounders. Not necessarily from anyone trying to cheat but often just by accident.
This is still a problem today. Even at the recent 2022 Viking Track Classic girls brought shots to be weighed in that were 8 pounders.
Those shots were impounded and not allowed to be used in the meet as to make the competition fair.
Hopefully that coach will get ride of that shot so it does not get used anymore but obviously that has not happened in the past since that one has been around for over 40 years.
I have recently found out that the shot that El Molino’s Ellie Roan used all last year up to the Showcase meet turned out to not make the 4k weight. Nothing about this gives me any indication that Roan was aware of this during the 2021 season. Thankfully Roan is having a great senior year in 2022 and currently leads both throws in the Redwood Empire. Still I need to go back and make adjustments to the 2021 stats.

Timing races, FAT vs hand times
Here is a piece I wrote getting into the details of this topic

If you have never noticed on straight-away sprint races I have three different lists of the best marks ever. One list for wind legal FAT times, one for races with FAT timing but did not have a legal wind reading, and one that includes all races including ones with hand times and the distance is converted from yards. To lump all these races into one category would be an injustice.

Hurdles
In high school hurdling their are four different heights the hurdles are suppose to be set at. 30 inches, 33, 36 and 39 depending on the race.
More than once I have seen a race run at the wrong height or one competitors hurdles at a lower height than those they are competing against.
I have also seen races were an entire row, sometimes in the middle of the race, sometimes the final set, were completely missing.
As you can guess this causes the times to be invalid. 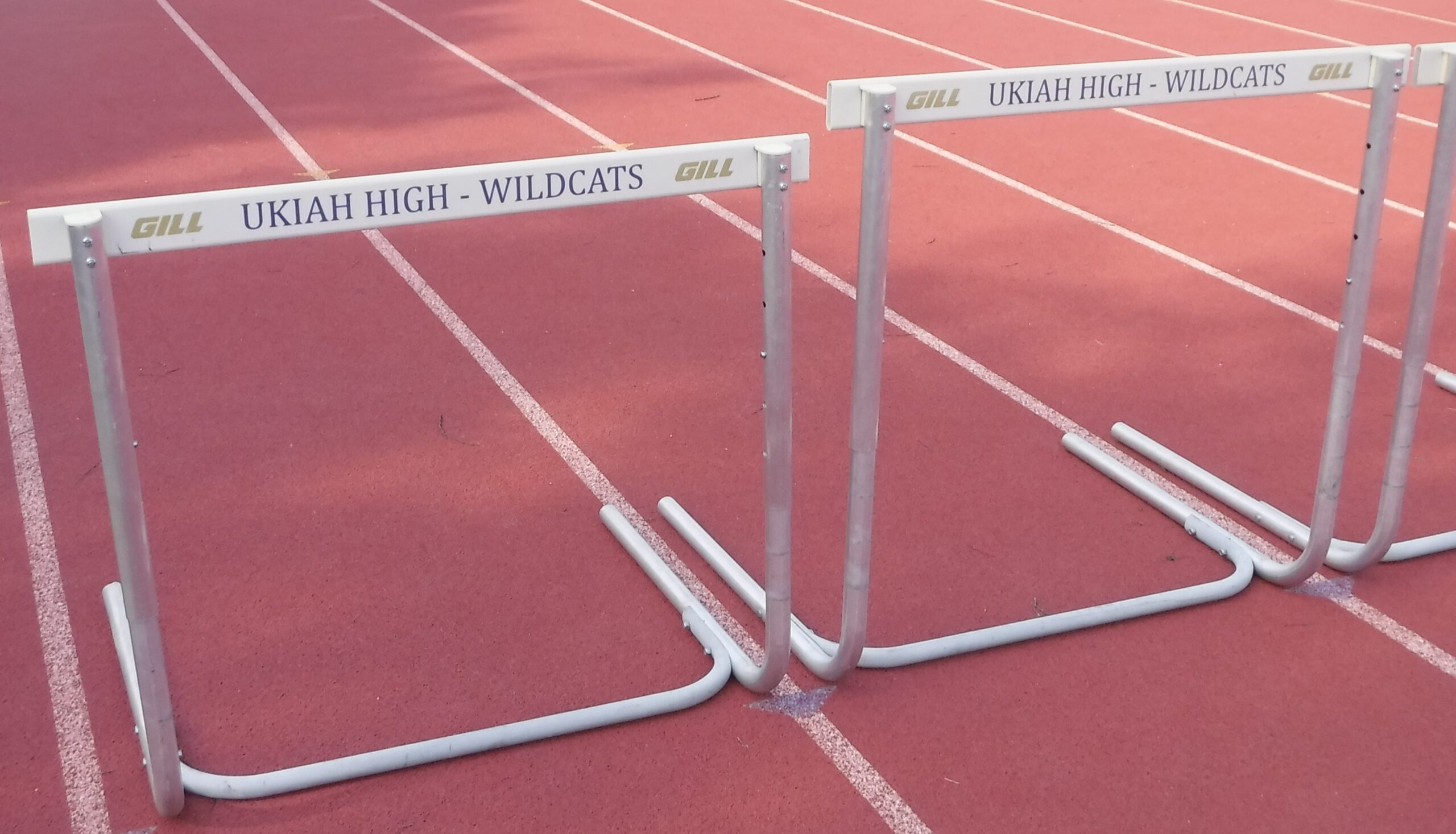 Sand pits
With schools seeming to have more and more trouble with budget shortages one of the places not being maintained, as in the past, are our long and triple jump pits.
This has caused some pits having the jumpers landing in a lowered pit sometimes six inches or more below the takeoff board. Some jumps then measure out around 6 inches farther than the jumper would have gotten if the pit was level. Now that still allows the competition that day to be fair, because they are all jumping in the same pit, but the marks can not count to compare with a proper pit.

Boys and Girls
The newest situation has to do with athletes born as male deciding to compete in the girls division.

Some background
June 23, 1972
Title IX of the Education Amendments of 1972 is enacted by Congress and is signed into law by President Richard Nixon, prohibiting sex discrimination in any educational program or activity receiving any type of federal financial aid.
July 21, 1978
Deadline for high schools and colleges to comply with Title IX athletics requirements.
The North Bay League had their first girls championship in 1975.

There are a multitude of terms floating around these days about gender.

The basics: DNA
Two of the chromosomes (the X and the Y chromosome) determine your sex as male or female when you are born. They are called sex chromosomes: Females have 2 X chromosomes. Males have 1 X and 1 Y chromosome.

The below exert is from the article In search of a level playing field. How male-to-female transgender athletes are impacting women’s sports
“When males reach puberty, their bodies begin producing large amounts of testosterone, the original, natural, performance-enhancing drug. It gives them increased strength, endurance, power, size and muscle mass, with less fat and bigger and denser bones, which can support bigger muscles and internal organs. The advantages of such hormones are so great that some athletes take synthetic hormones — anabolic steroids — to increase those advantages over their own sex.

Testosterone accounts for the difference between male and female athletic performance, and that difference is one of the very reasons women’s sports were created in the first place — to bring an even playing field. Other concessions have also been made for females — shorter tee boxes (golf), lower nets (volleyball) and hurdles (track), smaller implements (track and field) and smaller balls (basketball).”

If you think that this is all theoretical note that in Connecticut they have already had a high school state meet where the top two in the girls 100-meter race were transgender athletes.

A major reason that there exists a boys division and a girls is because the average male body, after puberty, is stronger, faster and has other physical advantages that can affect the level of performance in track & field, over the average female body.

I know that there are a lot of different views on all of this but for this web site I’m looking at this as a stats man, not a judge of viewpoints. If a school reports a great mark to me but then I find out that the athlete used a 10 lb shot instead of a 12 lb shot like everyone else, those marks are not valid or worthy to be included with those that competed on “a level playing field.” I have dedicated decades to compiling accurate records based on fact, taking into account factors that can change the results such as wind speed, implement weight, etc and it is my goal to continue to report and record reliable, accurate results going forward.

From all the studies I have seen so far it does not look like a person born with a male body could ever compete in the female division without the male body having an advantage.

One idea that has been tossed around is to add a third division for transgender participants.
In the future if this third division was created I would be open to compiling and adding statistics for that to this website…