March 3rd 1981
Santa Rosa’s Dennis DeSoto destroyed the Empires shot put record in his first meet of his senior year.
In a dual meet, against Analy, DeSoto launched a put 63-1, he went on to earn 2nd at State that year. 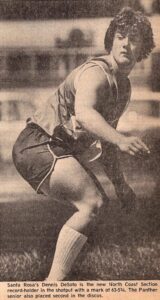 March 2nd 2005
At Napa, Sonoma Valley’s Mindi Wiley cleared 5-8 in the high jump. A mark higher than anyone had ever done other than herself and has still only been bettered by Santa Rosa’s Morgan Bertsch.

The Big Cat Invitational is usually this week and has had plenty of eye opening performances, especially in the pole vault, like the performances below.

March 5th 2011
You can watch Petaluma’s Danielle Steffen clearing 11-7 here on that date here.
Just noticed that that’s me walking in front of the camera at 35 seconds into the film. Now that’s triva.

March 3rd 2012
Maria Carrillo’s Siobhan Anderson made it three years in a row of super vaults winning at 11-6 . 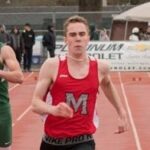 March 2nd 2019
American Canyon freshman Croix Stewart showed that all the hype we had heard about him was true as he blazed the 100 in 10.92 +0.0. He’s in lane four.
Watch the race