In the Redwood Empire the only event for boys to take home more state meet medals than the discus (12) is the shot put (20).

Healdsburg High had it’s own Olympic discus medalist more than 90 years before Maria Carrillo even opened.

Ralph Rose was born in Healdsburg on March 17, 1885.
While competing for Healdsburg High School he was voted the Cal-Hi Sports Athlete of Year for both 1902-03 and 1903-04.
In 1904, while at the University of Michigan, he won both the discus and shot put at the Big Ten championships.
He subsequently competed for the Olympic Club in San Francisco and won seven National AAU titles in the discus, shot and javelin.
A competitor in three Olympic Games, Rose compiled a medal total of three golds, two silver and one bronze.
At the 1904 Summer Olympics in St. Louis, Missouri, he was second in the discus, won the shot, third in the hammer throw and sixth in the 56-pound weight throw.


1910 photo of Rose and other Healdsburg alumni competing in an alumni meet verses the current Healdsburg squad.
In the 1912 Olympics in Stockholm, Sweden, he was 11th in the discus, won the two-handed shot put (throwing a total of 27.70 m (90′ 10½”) with his right and left hands), took second in the regular shot and ninth in the hammer. Photo of Rose on the right at 1912 Olympics, more photos
More about Rose

At the beginning of state competition, the international or college weight discus (2 kilo or 4 lb, 9 oz) was used through 1950, though the event was completely abandoned for many years. In 1951, the high school weight (1.6 kilo or 3 lb, 9 oz) was introduced. Through 1960, one or both weights were thrown, often as non-scoring events. In 1961, the discus (high school weight) became a scoring event.

There was no California High School state meet for Rose to compete in but the Redwood Empire did just fine in the discus in the first state meet in 1915.
Santa Rosa High’s Wayne Weeks would win both the discus (112-8) and shot (45-2) at the North Coast Section Meet of Champions in 1915 but at state teammate Clifford Merritt would win the state title at 113-0 (2 kilo discus) with Weeks taking 3rd. Weeks was state shot champion and Merritt was Pole Vault Champion (10-3).

Beginning in 1920, special awards were presented to boys who placed in competitions with college weight throwing implements, including the 16 lb shot and 2 kilo discus. These events were most often non-scoring (exhibition) contests among those athletes who had already competed in the high school weight events. The event was discontinued in 1959.

Santa Rosa High’s Owen McCann set one of the earliest North Bay League meet records in the discus as a sophomore in 1927 at 125 feet.
In 1929 he would win the NCS MOC at 134-1¾.
At state that year the Redwood Empire would take home two discus medals as McCann placed 3rd and Vallejo’s Lloyd Piller was 4th.

Sonoma Valley had a thrower named Mohr who broke the NBL meet record in 1936 at 136-5. No discus event at state this year.

Santa Rosa High produced their next NCS MOC Champion in 1937 when Sterling Bussman won the event at 137-6 3/8. No discus event at state this year.

Two years later Vallejo’s Bill Sweikert would reclaim the NCS title for the Empire with at 136-2½ throw in 1939. No discus event at state this year.

St Helena would again produce the NCS MOC Champion in 1944 as Lou Mozzini took the win at 119-1¾. There was no state meet to compete in that year because of world war II.

Ukiah’s Bill Hook was lucky enough to compete in one of the years were at state they had the chance to throw both the high school implement and college one. Hook would be the last athlete to to win with both implements in the discus.
He would place fourth with both weights in the shot put.
At state Hook threw the 2 kilo discus 145-0 and the 1.6 kilo (HS) 166-8.
His 166-8 mark was the 16th best in Nation for 1958, and a Redwood Empire record.
In 1958 Hook also had a 2 kilo toss of 152-1¼.
That same year Santa Rosa’s Andy Alkire would throw the 2 kilo discus 138-0.
Those two marks in 1958 are still the longest 2 kilo throws by Empire high school throwers.
Hook coached at Ukiah High for many many years.

In 1961, the discus (high school weight) became a scoring event at state.

Field event relays use to be more popular at Invitationals than they are now.
In these events schools would enter three throwers and each ones best distance would be added up for the schools total.
The first known Empire record for this event was in 1962 by a Montgomery trio who threw 407-4.
The next year the Vikings up the record to 411-6.

Santa Rosa’s Mike Grace would not only take down the NBL meet record in 1965 but his winning throw of 169-0½, was also a new Empire record. Later he would coach the Montgomery team to three straight Boys NBL pennants (1977-1979) and the 1979 NCS 3A title.

El Molino’s Wayne Catron broke the meet record in the NBL II meet in 1971 with a 157-6 throw.
The next year the leagues name was changed to the Sonoma County league and he increased the meet record to 160-2¾. 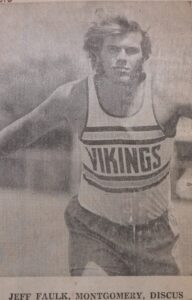 Analy’s Chris Sorensen breaks the junior class record in 1977 with a 164-9 toss.
The following year he would take down the SCL meet record with a 162-10 mark.

If not for Sorensen then Casa Grande’s Brian Lake would have been the junior class record holder. His 163-0 throw made him the number two junior ever at the time. Lake had the longest throw of 1978. 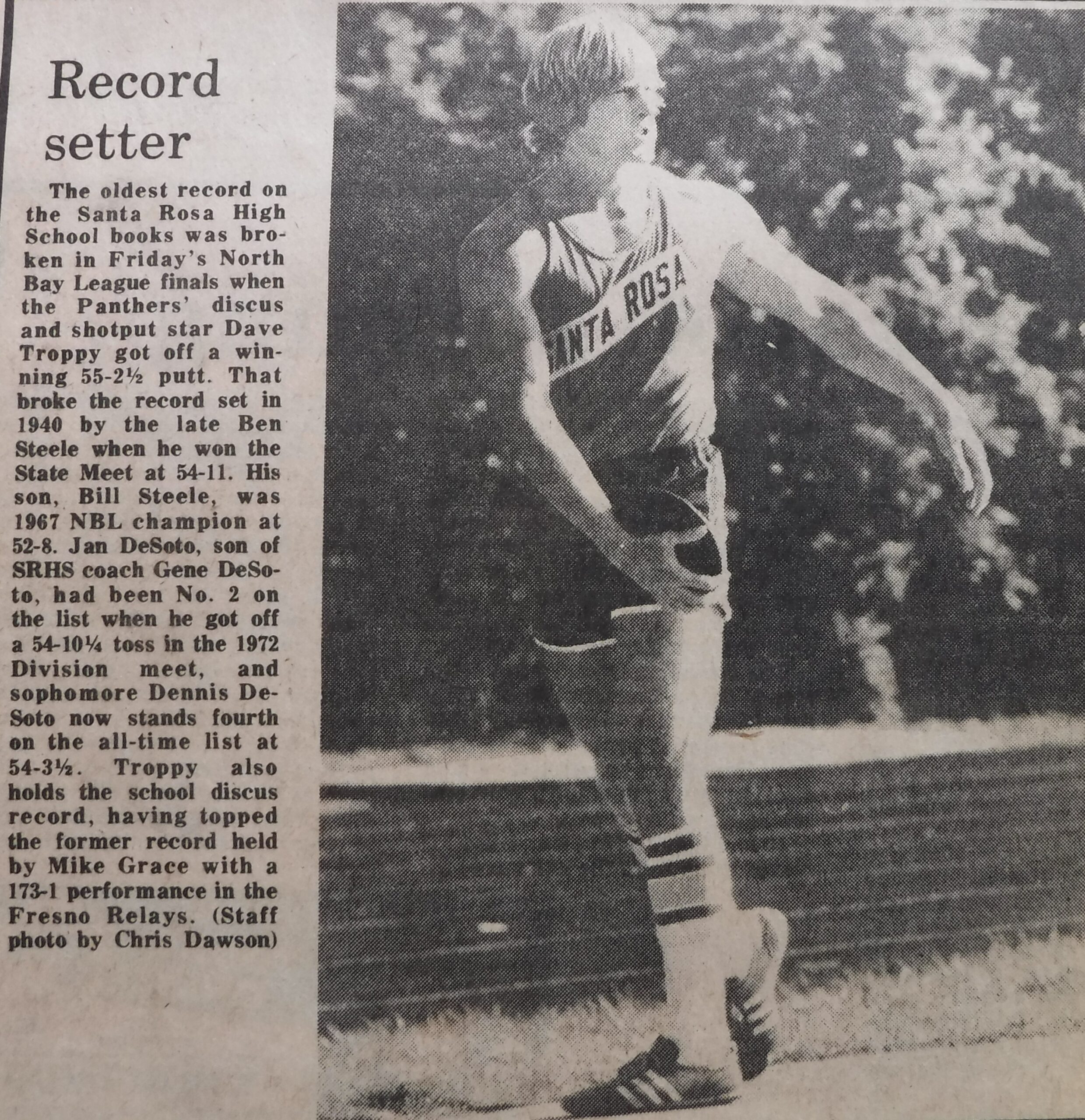 1979 started one of the best three year discus battles.
Montgomery’s Chris Day would break the sophomore class record that year with a 160-0½ mark.
Santa Rosa’s Dennis DeSoto moved to number two All-Time sophomore with his 150-9½ throw.
To this day they are still 2nd and 3rd sophomore’s All-Time.
As you read about what was going on in the discus don’t feel bad for DeSoto because he was setting all kinds of records in the shot put.

Days junior year something else.
He first erased the Redwood Empire record in early April at a dual meet in Ukiah. Gone was Silcox’s 174-4 as Day spun to 175-1½.
Three days later he would extend it to 176-4½ by winning the Santa Rosa All-City meet, still the meet record.
At the NBL finals Day would break Mike Grace’s meet record with a 170-3 throw. Grace was Days’ head coach at Montgomery that year.


At the NCS 3A finals Day would yet again beat his own Empire record with our first ever 180 foot toss at 180-4½.
That mark still stands as the junior class record. No other junior has ever broken 170 for us.
At state Day would be our first discus medalist since Hook in 1958 with a 6th place finish at 174-4, after having a 180-0 toss in the trials.

1981 Senior Year
Day shows he is ready for the season at Fairfield in March with a 173-10 toss.
Mid April major battle at the Santa Rosa Relays as Day goes 174-5 to DeSoto’s 172-6.
Then on April 29th Day would toss his record toss (181-6¼) that would last just over 39 years at Rancho Cotate
Chris Day’s big day hardly noted
DeSoto would respond the next day vs Newman at the SRJC with a 176-11 throw.
Day would win the Montgomery vs Santa Rosa dual with a 171-10 throw.
Over in the SCL finals Healdsburg’s Jim Bailey would set a new meet record there at 164-11.
Day lengthened his NBL meet record to 173-8.
Day would dominate the NCS 3A meet at 175-10.
The NCS MOC would be one of the rare times DeSoto would beat Day.
Northgate’s John Berry would win with a huge 187-6 mark.
DeSoto would take 2nd with his All-Time prep best of 178-7.
And Day threw 174-7 for third.
At the state trials DeSoto would only make the finals in the shot while Day qualified with a 176-11 throw.
In the finals Day would throw 179-1 for second behind Burrough’s Antonio Dobbins throw of 180-10. Berry was 3rd.
So far this is the Empire;s last boys discus throw medal at state.
Day would finish his prep career with 27 throws over 167 feet.

Everyone around Sonoma County involved in the throws knows coach Paul Troppy at Santa Rosa High.
I was lucky enough to coach with him during ours days at Montgomery.
But before all that he was a star at Santa Rosa High.
NBL champion in 1984 (152-0) and going all the way to state for a 7th place finish at 161-8.

Cardinal Newman’s Austin Davis was a 2008 co-Athlete of the Year. 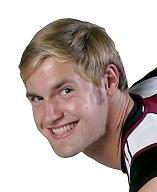 Middletown’s Bryson Trask would have a year to rival Day’s plus taking the Empire record at 181-10.
Middletown senior throwing everything he’s got into discus, shot put
2019 ATHLETE OF THE YEAR
I think his season record below describes his season best.
He was also the NCS MOC shot champ with a season best of 57-8 and another 11th place finish at state.