Spring Lake Regional Park is the home of one of the area’s best known prep cross country courses.
That course was established back in 1987. 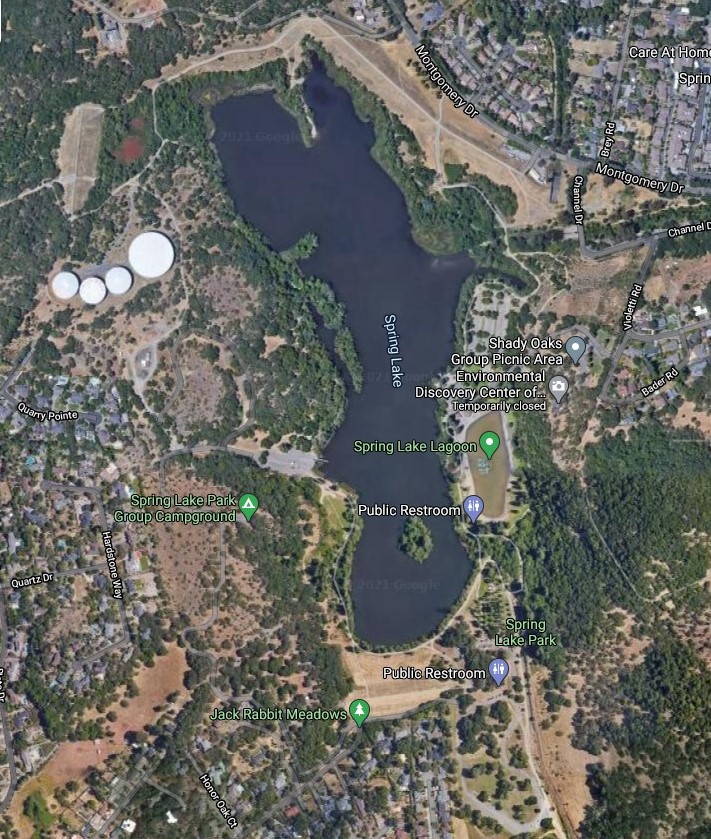 The beginning
In 1963 the Sonoma County Water Agency constructed an earthen dam for flood control purposes to protect Santa Rosa. We now call that the south dam.
We all call it a lake but I guess the Santa Rosa Creek Reservoir is actually a reservoir.
Spring Lake Regional Park is 320-acres located at 393 Violetti Road in Santa Rosa. The park includes a 3-acre swimming lagoon and the “lake” is listed at 72-acres.

Surrounding area
During the period of 1973 to 1975 the County constructed recreational facilities around the lake and Spring Lake Park opened. Also during this time period the State Parks Department acquired land for Annadel State Park.

To the south-east of Spring Lake is Trione-Annadel State Park. It was established in 1971 and is 5,092-acre.
With its many trails and mountains it is one of the favorite training grounds for distance runners. 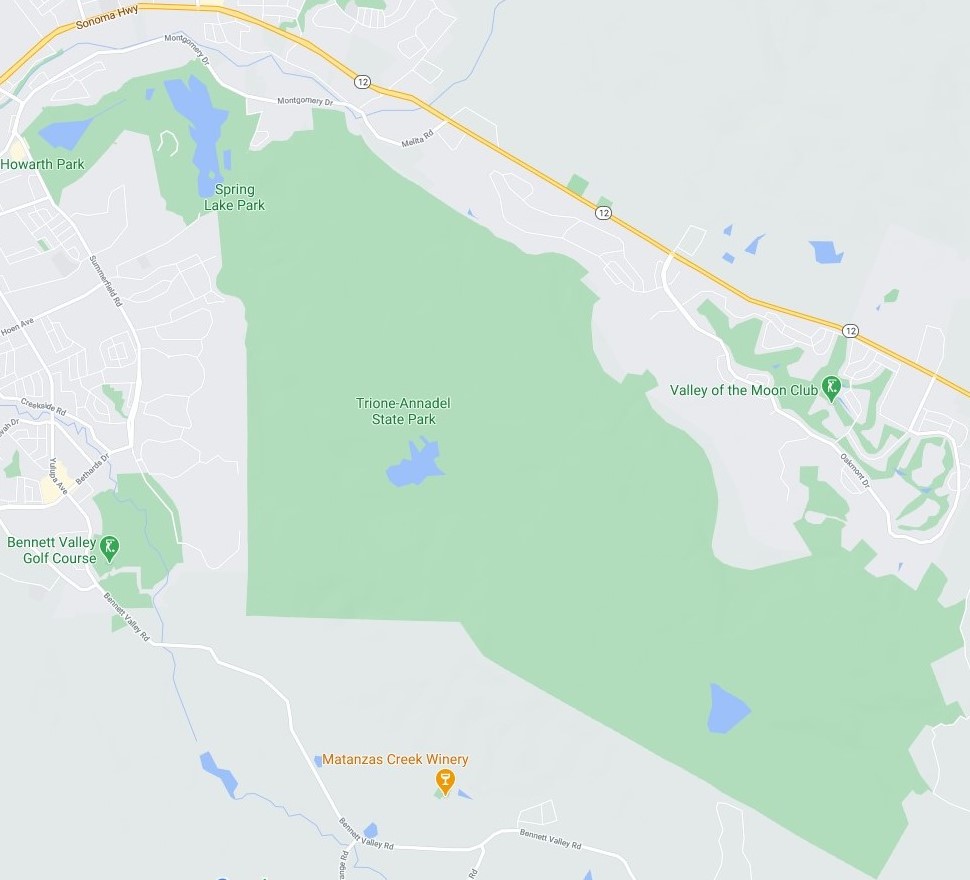 The Spring Lake Cross Country Courses
We have such a rich history with our current Spring Lake course entering it’s 33rd year of use.
But it has not always been that way. For the most part the course used for high school meets changed every few years.
I have some info on North Bay League finals going back to 1961 and North Coast Section races going back to 1954, when a Santa Rosa High runner named Darryl Beardall placed 3rd at the NCS finals.
But I only have stories on prep races at Spring Lake going back to 1974.

The first record I have of a Spring Lake course is when Petaluma’s Danny Aldridge won the 1974 NBL finals by 1:06 over the field.
The article says that Aldridge held the course record at 16:23 but in the finals he obliterated that time bringing it down to 15:52. There was no mention of the distance of that course.

In 1975 Spring Lake was also used for the NCS 3A Redwood Empire Regionals. In the Boys race Redwood won with 27 points. Hal Schultz of Redwood was first in 16:35, Santa Rosa High’s sophomore Armand Moreno was 5th in 17:13, the Montgomery team placed 5th at 160 pts.
In the girls race Tamalpais won with Ukiah in 4th. Marin Catholic’s Sarah Sweeney 1st 10:16 and Ukiah’s Jody Garrard 9th at 10:52. This was the first year that Santa Rosa schools had girls cross country teams.


The 1976 NCS MOC was run at Spring Lake. The boys ran on a 2.8 mile course, probably the one I will talk about below, but times recorded were off. Word is the official timer left before the boys race ran.
Piner became the first Redwood Empire school to win the NCS large school title scoring 60 points under coach Jimmy Underhill. Redwood’s Rod Berry was first with Piner’s Mike Biando in 8th.
The Girls would have been on the 2.2 mile course. Granada 1st 80 pts, Montgomery 4th 131 pts. Pleasant Hill’s Linda Robinson 1st 11:53, Montgomery’s Heidi Messerschmitt 6th 12:19.

In 1977 Spring Lake was used again for the NCS 3A Redwood Empire Regionals. A shorter course was used again with the winning boys time being 12:33. On the girls side Montgomery won the meet under coach Jeff Held.

My era courses
Sometime around 1980, I decided I wanted to know the distances of the races I ran during the 1976 and 1977 fall cross country seasons.
My Santa Rosa Junior College coach, Pat Ryan, let me use his official measuring wheel.
The photo of the map down below shows the measurements I took for the three different courses we used during those years.
All three courses used a staring line that was then a dirt parking lot, just north of the swimming lagoon. I believe now there is a helicopter landing pad in that spot.


The courses went counter clockwise around the lake, finishing near the northern lagoon bathrooms.
The Varsity boys course came out to 2.93 miles. It ran across the north dam of Spring Lake and then up to the top of the west dam before the runners headed into Howarth Park for an almost 2,000 yard loop before returning to Spring Lake Park, around where the Huge Water Tanks are now. It then followed how the current course goes up onto the south dam before runners headed to the lagoon for the finish.

The JV boys and the Varsity girls ran a shorter course following basically the shortest way around the lake.
We actually had two courses for the girls and JV boys, one that had as much dirt trials as possible that was 2.05 miles long and one for muddy days that was almost all paved that was 2.19 miles long.

A new course was run for the 1978 league finals with a combined NBL/Sonoma County League teams running together.
No distance is listed but Petaluma’s Dave Royal established the new record with a 14:41 time followed by Ukiah’s Steve Howard (15:01), Rancho Cotate’s Greg Fogg (15:03) and Piner’s Brian Hoyt (15:15) in 4th.
Royal was picked to the 1978 ALL NORTHERN CALIFORNIA BOYS CROSS COUNTRY TEAM. Howard and Fogg were Honorable mention.
The girls new record went to Ukiah’s Dana Flint on a shorter course at 10:51. Flint was a sophomore and was picked to the 1978 ALL NORTHERN CALIFORNIA GIRLS CROSS COUNTRY TEAM.

In 1979 another new course was designed for the league finals that would also be used for the North Coast Section regional meet and the Meet of Champions.
Mission San Jose’s Jay Marden clocked 14:14 over the 2.9 mile course to win the NCS MOC meet.
Marden was 6th that year at the Foot Locker National Championships and then was National Champion in 1980 in a course record.
Marden won the Kinney West Region in 1980 on the Woodward Park course in 14:40 which was a California Record at the time and is still the #7 time ever on that course, and still the NCS best.
Marden ran a 8:51.65 3200 at State Track Finals in 1981 which was 2nd in the meet and held up as the #2 time in the Nation that year.
This season also saw the NCS realign their regional meets into four sections by size. The NCS 4A had the largest NCS schools competing to qualify on with the 1A being the smallest schools.
The 3A meet this year was held at Spring Lake.
At this 1979 Spring Lake meet Petaluma’s Lisa Dailey set the course record in 12:31 over the 2.1 mile Spring Lake course, while Piner’s Brian Hoyt won the boys in 13:15.

No distance was listed for boys at Spring Lake in 1980 but the girls race was listed as a 2 mile course.
Petaluma junior Lori Shanoff won the NBL meet in 10:31 over Flint (10:50).
That year Shanoff won the NCS MOC meet by 47 seconds and covered the Woodward Park course in 18:43 later that year.

In 1981 the boys Spring Lake course was listed as 3.2 miles with Ukiah’s Mike Sutton running 16:59 for the boys NBL win and Shanoff taking her third NBL title. She went on to win the NORCAL meet after two poor showings in NCS meets.
The NCS 3A meet was held at Spring Lake that year with El Molino’s Marc Ziblatt winning in 16:41. Terra Linda’s Robin MacSwain won the girls in 18:36.

In 1982, Larry Meredith began coaching at Montgomery and established an around-the-lake 5K that started and finished at the swimming lagoon.
This course was used for the next four years.
The NCS 2A North finals ran there in 1983.
Cardinal Newman’s Ryan Gilliam (15:45) and Ursuline’s Julie Ruiz (18:21) both broke the course records under wet conditions.

Excerpt from Larry Meredith’s recap of the Viking 2000 season.
“The Viking Opener Cross Country Invitational was first held in the fall of 1985. That year Spring Lake Park was completely closed for months due to the invasion of hydrilla, an exotic, aquatic plant that threatened to overtake the lake. So the first VO was held in nearby Annadel State Park on an odd, L-shaped, 2.2-mile course. The course moved to Spring Lake the following year but the current 2-mile course wasn’t established until 1987.”

In 1986, Meredith took a one year sabbatical and Matt Malvino filled in as Viking coach. As I recall there was some type of park construction going on at the new starting line area and a different course had to be used that year. It was a 5,000m course, that I believe was the same one used by the Santa Rosa Junior College team at the time.

Upon his return Meredith established both the current 2.97 mile Spring Lake course and the 2 mile Viking Opener course.
That course I will cover in part 2.