Spring Lake Regional Park is the home to one of the areas best known prep cross country courses.
That course was established back in 1987.

As mentioned in part 1, Larry Meredith began coaching at Montgomery in 1982 and established an around-the-lake 5K that started and finished at the swimming lagoon.
This course was used for the next four years.
In 1986, Meredith took a one year sabbatical and when he returned for the 1987 season a new course was needed.
I had always been told that the course was first used in 1988 but during this research it turns out it was a year earlier.
Meredith said “My recollection is that I wanted a course that did not loop the lake. It was too difficult to monitor and not spectator-friendly. The head ranger at the time wanted us to avoid the road loops at Oak Knolls so I was happy with this new course.” 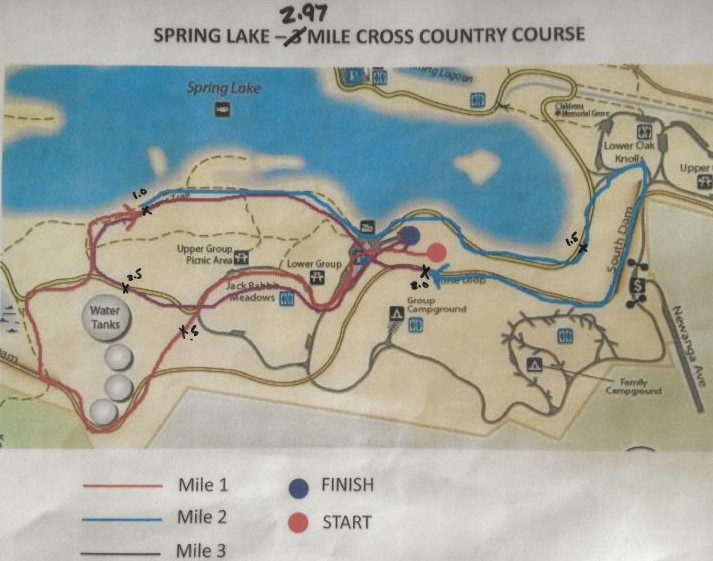 This new course allows spectators to easily watch the start of the race and view the first 1/4 mile run, then have the runners in view from about the 1 1/4 mile mark to just past the 2 mile marker and then again at the finish while only needing to walk about 100 yards the whole time. Meredith’s measurement of the course came out to 2.97 miles but would sometimes be listed as 3.0 miles in newspaper articles.

The very first course record set on the 2.97 mile course was 16:32 for the boys and 21:24 for the girls.
Today the records have fallen to 14:43 and 16:15. These are 4:57.3 and 5:28.3 mile paces for 2.97 miles.
Over the years others had re-measured the course and you will find many newspaper articles and other accounts saying the course was as long as 3.05 miles but the course has again been re-measured and found to be the original 2.97 miles in distance.

Along with this new 2.97 mile course’ Meredith also created the 2.0 mile course that has been used for the Viking Opener since 1987. 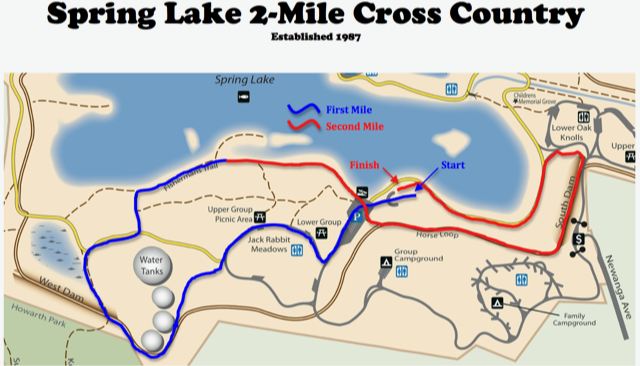 Next up is
Part 3: Boys on the course